Besides the obvious struggles, Ian’s Cancer treatments three years ago have created other problems for him now. The radiation machine that zapped the bad cells in his brain also deteriorated Ian’s gums and teeth. Two years after his treatments, our dentist told us Ian needed to get eight caps on his molars. The two-hour procedure was horrible for Ian; the recovery was worse. They sent him home with no pain killers. By the time the anesthesia wore off, Ian was crying and nauseated from the intense pain. It took three days for Ian to feel better.

That was a year ago. The ordeal is not over, however. Sometimes, capped teeth will have a buildup of fluids in the root area, which then requires extraction so the tooth doesn’t get infected. Two of those eight teeth had to get pulled over the last year. The second one was pulled this past week.

Knowing that he had to have another tooth pulled upset Ian. His memories of the first major procedure are still pretty fresh in his mind. He cried and whined about it for a while, but knowing that a pulled tooth means a visit from the tooth fairy calmed him down. I’m thankful he still believes even though he continues to have other children tell him the tooth fairy isn’t real. I’ve worked hard to keep the illusions alive; they help him get through some difficult things.

Ian went to bed that night with his tooth next to him. We told Ian the tooth fairy knows when he’s brave or having a hard time with his tooth, so the amount changes depending on his experience. Dave and I talked about giving Ian $2 this time since it was a difficult experience.

The next morning, I heard a frustrated, “Oh, man!” from Ian’s room. He came to me upset: “The tooth fairy didn’t come. She forgot about me.” I looked at Dave. We both forgot about the tooth fairy. I felt sick. Before I could think of an explanation, Ian said, “Oh, no. I bet she’s sick or something happened to her. There’s no way she would forget me. I feel bad that I got angry, Mommy. Something must be wrong.”

I had to hold back tears. I hugged him tight while saying, “You have such a sweet heart, Buddy. Of course she wouldn’t have forgotten about you. I’m so proud of you for not just thinking of yourself!”

“Do you think she’ll come tonight?”

“I bet she will. I don’t think anything will keep her away from you tonight.”

“Good.” He hugged me back and went about his day.

How could I have forgotten the tooth fairy? The only thing that outweighed my guilt was the shock over Ian’s reaction. How did my seven-year-old son turn that around on his own? How did Ian become a child who could so easily let go of his own needs and disappointment to feel compassion for another person (or, in this case, a fairy-tale creature)?

Having such a tender heart can only come from understanding pain; Ian knows pain. He knows it so well he can’t stand the thought of another person hurting.

So often, we try to shield our children from pain; no matter how hard we try, painful experiences will enter our children’s lives. If I could have, I would have given my life so Ian would not have had to fight his Cancer battle. But it was that very battle that continues to develop his sense of compassion. Ian does know pain; however, he also knows love, sympathy, thoughtfulness, and acceptance because of it. 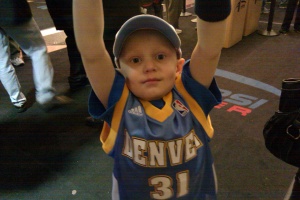