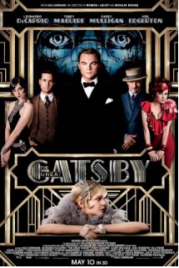 On May 10th, 2013 the new attempt at turning the beloved novel into a movie will be released; as hopeful as I am that it will be a beautiful rendition, I am just as doubtful that anything can do it justice. The other versions fell flat. They did a good job at presenting the basic plot of the story, but the heart of the story hasn’t played out well on screen.

Why? I believe it’s because the beauty of the novel lies not so much in the plot, but in the words on the page.

The story paints a bleak picture of 1920’s America–a story based on truths that has led to our present reality. Despite the glitz and glamour, not one of the characters is likeable. Even the narrator, try as he might to deny it, is despicable. The only character who is immune to that judgment is Gatsby–the one thing that Nick, the narrator, tells readers–yet we are supposed to despise Gatsby and everything he represents. After all, Gatsby’s shady steps to fulfilling his dream came at others’ expense. However, try as we might, we can’t hate Gatsby; he is a tragic figure who worked his whole life to grasp a dream that began disintegrating in his hands as soon as he touched it.

Trust me, the tragic American hero comes alive more on the page than he has on screen–at least so far. Unfortunately, we have a generation of passive readers in our midst, which will make reading The Great Gatsby extremely difficult for them. Fitzgerald refuses to tell the reader–anything; instead, he shows the reader everything–every movement, every expression, every bit of scenery and decoration–hoping to inspire the reader to think what it all means and judge for him or herself. A mental exercise most people shy away from these days.

In an attempt to encourage people to read The Great Gatsby, and not just passively be entertained by the movie, I am sharing my favorite quotes from each of the nine chapters. Pay attention to the poetry in his prose, to the images Fitzgerald shows us, and what those things make us feel and think.

If personality is an unbroken series of successful gestures, then there was something gorgeous about [Gatsby], some heightened sensitivity to the promises of life . . . –it was an extraordinary gift for hope, a romantic readiness such as I have never found in any other person and which it is not likely I shall ever find again.

Please, feel free to share your thoughts or your favorite quotes from this chapter in the comment section below.